"One of the most gifted Mexican young storytellers." Eduardo Antonio Parra

Hiram Ruvalcaba (Zapotlán el Grande, México, 1988) is a storyteller and a literature professor. He currently pursues the PhD in Humanities at the University of Guadalajara. He holds a B.A. in Hispanic Literature from the University of Guadalajara and an Environmental Engineering degree from the Instituto Tecnológico de Ciudad Guzmán, as well as a master degree in Asian and African Studies from El Colegio de México. He has been a fellow of the Stimulus Program for Artistic Creation and Development in Jalisco 2006 and 2019 and a scholarship from FONCA in the 2021 Young Creators category. Winner of the Mariano Azuela National Narrative Award in 2016, the Comala National Young Short Story Award in 2018, the Ricardo Garibay National Youth Chronicle Award, as well as the José Alvarado National Short Story Award in 2020, and the Agustín Yáñez National Short Story Award in 2021.

He has published the books of short stories The spectator (El espectador, 2013), You will deny me three times (Me negarás tres veces, 2017), The nameless night (La noche sin nombre, 2018), Fathers without children (Padres sin hijos, 2021), and the book of chronicles The children of water (Los niños del agua, 2021), as well as the translations Kwaidan. Strange narratives of ancient Japan (2018) and The romance of the milky way (2017), both by author Lafcadio Hearn.

Todo pueblo es cicatriz (Every town is a scar)

Since biblical times the bonds between children and parents have been extremely tortuous. Even if it is generally believed that they are based on the call of blood, the years of familial coexistence -or lack thereof- usually produce friction, accidents, envy, impositions, resentments and grudges, as well as endearing closeness, pride and complicity. What is a child? Parents seem to ask themselves in the stories in this book.

How should we proceed with a son/daughter in order to make him/her the spitting image of ourselves? While the offspring contemplate their parents between admiration and repudiation, between severe judgment and unconditional affection.

Hiram Ruvalcaba addresses in these pages one of the eternal themes of human nature, and he does so with a steady pulse, instinct and precision of an accomplished storyteller. The development of his stories, the psychological studies of the characters, the blunt endings, and his narrative strategies are extraordinary. Each of the pieces that make up Padres sin hijos explores a different plane of paternity until forming a tragic universe in which, thanks to the magic of literary language, readers will end up recognizing without remedy some aspect of their own paternal-filial relationships.

This is the work of one of the most gifted Mexican young storytellers.  Eduardo Antonio Parra

In The children of water, Hiram Ruvalcaba embarks on a journey to Japan, delving into its religion, philosophy and literature, which is -at every moment, in every line- a moving walk through his inner world, the one inhabited by mourning, grief and pain at the death of his son Tristán. In this collection of chronicles -which owes its title to the mizuko kuyō -a Japanese Buddhist ceremony for those who have experience the loss of a miscarrriage or a new born- Hiram reminds us that oblivion is a form of disgrace for our deceased. Hence, using the tools of testimony and self-narrative literature, such tour de force of expressing the unspeakable, he writes: “An altar is an amulet of love, a beacon that lights against oblivion, our way of telling our beloved dead that we will never give up their memory.”

“I was always afraid that my child’s soul would not have grasped at something, that he would have been shipwrecked in an endless darkness, unable to move toward any light or any paradise”, Hiram writes. That is what motivates him to delve into the spiritual and philosophical world of Japanese Buddhism, where he finds less categorical explanations about the fate of our deceased. And that exploration, with a mystical halo, is comforting because it distances us, for a moment, from that prevailing Catholic guilt in the imaginary of the West.

Antonio Porchia, the great aphorist, wrote: ” Suffering is above, not below. And everyone thinks that suffering is below. And everyone wants to rise”. Hiram is not afraid to ascend those turbulent waters of death to contemplate such resplendent, luminous and purifying pain in these seven pieces of non-fiction.  Erick Baena Crespo 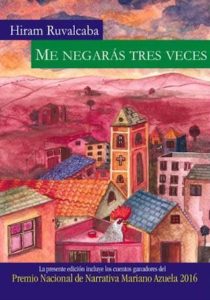