"A novel of madness, beauty and pain. What a great writer Claudia Ulloa Donoso is." Emiliano Monge

Claudia Ulloa Donoso (Lima, 1984) studied Tourism in Peru, Sociology in Norway and also a Master degree on Spanish literature from the University of Tromsø. Claudia is author of the short stories volumes El pez que aprendió a caminar (The fish that learned to walk)  and Pajarito (Little Bird), and the book Séptima madrugada (Seventh Dawn) based on her weblog of the same name. Some of her stories have appeared in the anthologies “Nuevo cuento latinoamericano” (“New Latin American Story”) edited in Madrid by Julio Ortega, and “Les bonnes nouvelles de l’Amérique latine. Anthologie de la nouvelle latino-américaine contemporaine” published by Gallimard in France. In 2009, the Guadalajara Book Fair selected Claudia in their “Forum of New Narratives” and in 2010 she was a guest writer of the “III Congress of New Ibero-American Narrators” organized in Madrid by Casa de América. Claudia has been named one of the most outstanding writers in Latin America as part of Hay Bogotá 39 “The Best 39 Latin American writers under 39 years old”. Claudia lives in Northern Norway (Bodø) where she works as a teacher of Spanish and Norwegian for immigrants. Her debut novel is I Killed a Dog in Romania (Yo maté a un perro en Rumanía).

I Killed a Dog in Romania 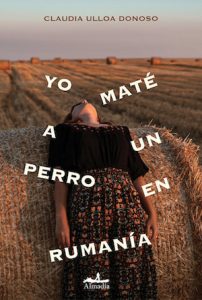 The protagonist of this story, a Latin American woman who teaches Norwegian to immigrants, is about to reach her limit; loneliness has brought her a few steps away from complete self-abandonment. Wanting to avoid the worst, her best friend decides to take her back to his native Romania on a trip that he finds impossible to postpone. There, among concrete blocks and neon signs, they see the tenuous bond that united them as migrants in icy Norway fade away. Sheltered by alcohol and drugs, surrounded by a language she doesn’t know in a country she doesn’t understand, the young language teacher will look for a way to hold on to this world. In the midst of so much darkness, she finds a brittle bark.

Claudia Ulloa Donoso’s first novel is an audacious exploration of death as an idea and intuition, but also an incredulous contemplation of its reverse: life and its stubborn insistence. Faithful to the literary quest she undertook in Little Bird, her celebrated collection of short stories, Ulloa Donoso has written a book that, between pleasure and fever, pushes language to its limits to remind us that only through it we are capable of facing the definitive verge that is the end of existence.

“This is a page-turner! A novel of madness, beauty and pain. What a great writer Claudia Ulloa Donoso is.” Emiliano Monge

“This novel was written in a state of grace. Please give all the awards in the world to Claudia Ulloa Donoso.” Edmundo Paz Soldán

“At the heart of this dark yet luminous story is a mystery that its narrators sense they need to unravel in order to achieve salvation. This novel is – as happens in the best literature – an exploration of the possibilities of writing, a path of self-knowledge and revelation in which underneath beats the impulse of death and self-destruction, the fantasy of disappearing, the suspicion that reality is a dream, a delirium or a foreign, unfathomable territory, like a foreign country. I Killed a Dog in Romania is an unpredictable and unforeseeable book, singular and beautiful.” Juan Pablo Villalobos

“The gaze of a dead dog returns to us, in this brilliant novel, our humanity in all its complexity and in all its depth. I still feel in my skin the tension, the anguish and the beauty of I Killed a Dog in Romania.” Jazmina Barrera

“A rare, beautiful and dark novel. Its final pages are the most brilliant and vibrant thing I have read in recent times.” Lorena Amaro 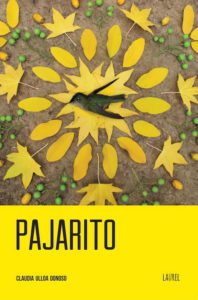 “If you haven read Claudia Ulloa Donoso´s Littel Bird, do yourself a favour and read it right now.” Emiliano Monge

“Cruelty and tenderness mixed with subtlety… Worlds built with small and fragile details. Common histories that become rare from page to page. Lost characters in a Nordic town who are capable to see in their routines fissures through which a parallel – sometimes monstrous – reality is filtered. Little Bird is written with a truly admirable unique delicacy.” Diego Zuñiga

“My latest discovery is Little Bird. In Little Bird, Claudia travels through dissimilar worlds united by a fine and strong thread: her splendid prose. Reading Little Bird is like opening the trunk of a distant relative that has left there a familiar world full of strangeness.” Carla Guelfenbein

“Little Bird demonstrates that always is possible to understand the construction of a short stories volume in a new way. It is not a question only of renewal of a genre that is inherently ductile, but also about how to give it a structure with originality, character and style. This is achieved in Little Bird. Ulloa Donoso tends to break with literature´s well-established topics. She turns them around, upend them. Right there – in her peculiar way of conceiving and developing short stories, and in the intensity of an own style, transparent and musical – lies the best of Little Bird.” Rodrigo Pinto, El Mercurio

Inside this volume there is a writer who collects screws, a peculiar nurse, works in hotels and sawmills, women that liquefy themselves in blood and water, sudden fiancés, perplexed men, a plant, a cat and a bird. The smell of Lima and the transparent perhaps aqueous air below zero degrees in the Øvre Hunstadmoen bus stop in Northern Norway. There are stories and pauses that however are not breaks but twinges. Little Bird is a masked antidote, a threat of life against death – a combat barely weaken – whose weapons are these experiments of imagination that counteract unknown tragedy and the white desperation of snow.