“This unforgettable novel is not only a visceral rejection of Canek Sánchez Guevara’s political inheritance as Che Guevara’s grandson but also a very personal cry for help.” Jon Lee Anderson 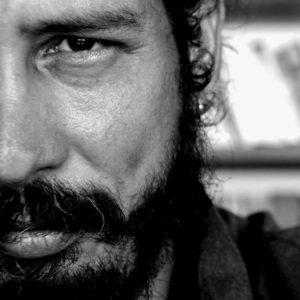 Canek Sánchez Guevara, grandson of Che Guevara, left Cuba for México in 1996. He was a writer, musician, photographer, a graphic designer and worked for many of Mexico’s most important newspapers as a columnist and correspondent. Canek wrote a regular newspaper column called “Motorcycleless Diaries” (to be published in Spanish in four volumes by Pepitas de calabaza Ediciones, vol. 1 October 2016). Canek wrote together with Jorge Masetti -a son of an Argentinean journalist who was a comrade of Che Guevara (Canek´s grandfather)-  the book Les héritiers du Che (Presses de la Cité, France, 2007) an eyewitness account of their upbringing in Cuba and their developing disillusionment. Canek was a measured and informed critic of the Castro regime which is reflected in 33 Revolutions. Canek died in México City in January 2015 before his forty anniversary. 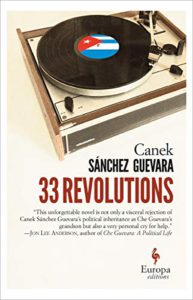 “This unforgettable novel is not only a visceral rejection of Canek Sánchez Guevara’s political inheritance as Che Guevara’s grandson but also a very personal cry for help.” Jon Lee Anderson

“Pioneers for or without Communism, let´s read Canek.”  Wendy Guerra

The hero of this mordant portrayal of life in contemporary Cuba is a black Cuban whose parents were enthusiastic supporters of the Castro Revolution. His father, however, having fallen foul of the regime, is accused of embezzlement and dies of a stroke. Following her husband’s death, his mother flees the country and settles in Madrid. Our hero separates from his wife and now spends much of his time in the company of his Russian neighbor, from whom he discovers the pleasures of reading. The books he reads gradually open his eyes to the incongruity between party slogans and the gray oppressive reality that surrounds him: the office routine; the daily complaints of his colleagues about problems big and small; his own obsessive thoughts which circulate like a broken record. Every day he photographs the spontaneous eruptions of dissent on the streets and witnesses the sad spectacle of young people crowding onto makeshift rafts and leaving the island. Every night he suffers from Kafkaesque nightmares in which he is arrested and tried for unknown crimes. His disappointment and delusion grow until a day comes when he declares his unwillingness to become an informer, and his real troubles begin.

33 Revolutions is a candid and moving story about the disappointments of a generation that believed in the ideals of the Castro Revolution. it is a unique look into the lives of ordinary people in Cuba over the past five decades and a stylish work of fiction about a young man’s awakening.